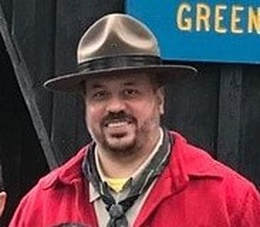 ​Congratulations to OMC Cub Master Peter Amuso, the recipient of the 2018 Northern District Award of Merit, which is issued annually to Scout leaders who render service of an outstanding nature at the district level.

According to Joseph Leiss,  Senior District Executive for the Northern  District, “Peter is not only the outstanding Cub Master for  OMC Pack 1855 Hill, helping them to become one of the preeminent packs in the district in less than 2 years.  He is also a Wood Badge candidate.  This year, Peter voluntarily took on the (then vacant) role of District Day Camp Director to ensure that the youth of Northwest Philadelphia have the opportunity to experience the outdoor adventures that they look forward to when joining Cub Scouts.”   Please join us in congratulating Peter.

The presentation of the Merit Award will take place at the Northern District Annual Dinner on Sunday, May 6 (4-8 PM) at the Temptations Banquet Facility (220 West Chelten Avenue - Philadelphia, PA 19144)  Registration for the dinner can be found at colbsa.org

​March 14th was a milestone in the history of Pack 1855 when our first Cub Scouts crossed over to Boy Scouts!  OMC fifth graders Chip Amuso, Jake Bischoff, Gabe Dumenigo, Michael Gallagher, and Ethan Ravasco walked across the floor of our Parish Hall, shook hands with Scoutmaster John Macoretta of Troop 474, and officially became Boy Scouts.

Troop 474 is based out of the Scout House in the Wissahickon Park, and is charted to Immaculate Heart of Mary Church in Roxborough.  Together, Pack 1855 and Troop 474 provide a strong program of Catholic Scouting for Northwest Philadelphia.

The Arrow of Light Award is Cub Scout’s highest award.  In order to receive this award, our Webelos den had to organize their own camping trip, meeting with the Attorney General of Pennsylvania, earn their Parvuli Dei award, and travel with a Boy Scout Troop into the woods of the Musser Scouting Reservation.  Earning their Arrow of Light Award were OMC fifth graders Chip Amuso, Jake Bischoff, Michael Gallagher, Ethan Ravasco, and (not pictured) Gabe Dumenigo.   Their Den Leader is Peter Amuso. The Arrow of Light Award is the only Cub Scout Award that can be worn on the Boy Scout uniform. These five Cub Scouts are now making their plans to cross over to a Boy Scout Troop this spring, making them the first Pack 1855 Cub Scouts to do so.