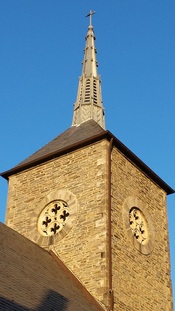 From its beginnings before the Civil War, Our Mother of Consolation Parish grew and flourished to become an integral part of the Chestnut Hill Community.

In the middle of the nineteenth century, Roman Catholics in Chestnut Hill and surrounding areas walked several miles to attend Mass at St. Vincent de Paul Parish in Germantown or St. Matthew’s Parish in Conshohocken.

In 1854, John Middleton, a wealthy Quaker who had recently converted to Catholicism, petitioned St. John Neumann, then the Bishop of the  Diocese of Philadelphia, for a church and priest for Chestnut Hill.  Unfortunately, Bishop Neumann could supply neither the funds for a new church nor a priest to serve the few Catholics who lived in the area.  But he did promise that if Middleton could find a priest and if the people would build their own church, he would sanction the parish.

Middleton then went to Old St. Augustine’s Church at Fourth and Vine Streets in Philadelphia and spoke to Dr. Patrick E. Moriarty, O.S.A., the Commissary General of the Augustinian Order in the United States.  Dr. Moriarty promised to become the Chestnut Hill parish’s first pastor as soon as the new church was built.

Middleton promptly purchased a 150 square feet piece of property on the north side of Chestnut Hill Avenue and construction began on the new church.  Despite considerable anti-Catholic opposition from the Native American Party,  better known as the “Know-Nothings”, Middleton and other new parishioners continued to  tirelessly work and on  November 11, 1855, Bishop Neumann blessed the new church, a 90 by 65 foot structure officially named St. Mary’s.  St. Mary’s cost $14,542.90 to build.  Most of the money came from John Middleton.

In 1858, John Middleton sold his “Monticello” home and 14 acres north of Chestnut Hill Avenue to the Sisters of St. Joseph.  Even in these early years, St. Mary’s was growing rapidly and the need arose for a school for the parish children.   Dr. Moriarty opened the first school in 1862 in an old tenant house at “Monticello” with the Sisters as the first teachers.  This was the beginning of over 150 years of service by the Sisters of St. Joseph to the children of the parish.

The Oblates of St. Francis de Sales began their ministry at  Our Mother  of Consolation Parish on July 1, 1999.  Francis de Sales was ordained Bishop of Geneva in 1602, but was forced to reside in Annecy, now part of France, because Geneva was under Calvinist control.  After Francis de Sales’ death in 1622, at the age of 55, Jane Frances de Chantal, founder of the Sisters of the Visitation of the Virgin Mary, wanted to establish an order of men who followed the teachings of St. Francis de Sales.  Her dreams were finally realized over two centuries later in the work of Father Louis Brisson and Mother Marie de Sales Chappius.

The Oblates of St. Francis de Sales, a religious community of priests and brothers, was founded in 1875 in the kingdom of Savoy, which bordered France, Italy, and Switzerland.  Since then, thousands of men from virtually every continent have joined the community.   In August 2015, the first OMC parishioner, Christopher Allen, professed annual vows as an Oblate of St. Francis de Sales.
Parish Registration Form
OMC staff